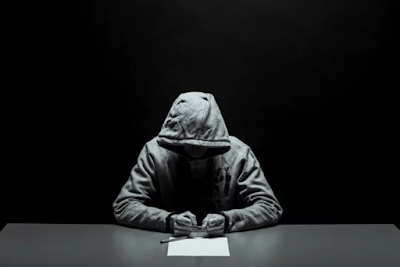 
It has taken me a very long time to summon up the strength of will to write what I hope you're about to read. It has taken seemingly exhausted reserves of personal motivation to put finger to key and punch out what I'm about to share.

I'm suffering from being functionally depressed. I have been for the better part of two years. At a time in my life when I have more resources and seemingly more personal freedom than I've ever had.

Everything I've worked hard to create and build and earn amounts to what I'm told and objectively believe to be a pile of great accomplishments. But it feels to me like half-assed work and the recurring acceptance of "adequacy" not excellence.

But I'm continuing to do it and I for the most part continue to improve the situation of my family, friends and employees.

I'm functionally depressed -- Not dealing with high-functioning depression (which is a completely different thing where you suffer from major depression but don't experience the huge moments of ennui or motivational exhaustion).

What's the difference you ask? Well... let me explain in great detail!

Functional Depression is a term I just made up as I was thinking about how I've been feeling and working and doing anything over the last two years or so. It's characterized by some of the same traits as classic depression - low energy, a lack of joy in accomplishments, feeling unhappy when your friends and family recognize your accomplishments, but it also doesn't debilitate you from managing a successful company or maintaining positive social relationships or prevent you from doing the things that need doing on a daily basis.

High-functioning Depression is a made up term used by professionals in the mental health field who can't quite apply the concept of Major Depressive Disorder (MDD) or Chronic Depressive Disorder (CDD) to a seemingly successful person. Those afflicted with this debilitating disorder don's quite fit into the bucket of people who can actually have the tell tale marks of these issues but still seem to be able to do daily tasks and maybe even perform above peers in work or social situations. Some people also like to claim this is persistent depressive disorder (PDD) because it sells self-help novels to insist someone undergoing hardship and depression events over time have to be a disorder. (But Seriously, don't take my word for this.. I actively dissuade people from studying Psychology because it's an art and not a science - just like medicine.. shit.. this is going downhill fast.. er here, have a link!!)


Now that I look at it.. maybe they aren't different at all.. but don't ask most therapists. They can't agree on the definition of High-functioning depression (or if it is even a different thing from good old fashioned depression). 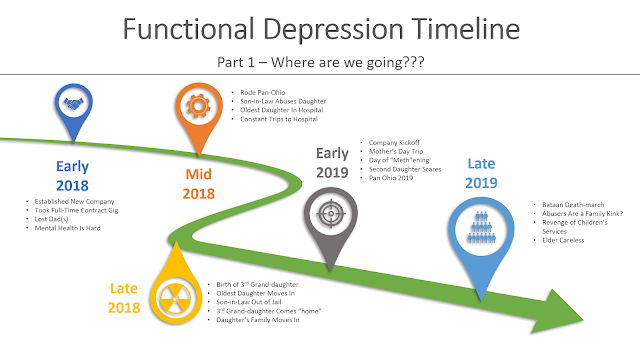 Readers Note: Through this series of articles, I'll be running through some chronological events leading up to "today" to aid the reader in understanding within each entry. (Many of the stories may be presented out of order for impact and effect). I'll also highlight the point on the timeline where we find the events and the changes detailed in the story. (See Art School sometimes pays for itself... err... Nevermind, it never pays for itself - don't go to Art School kids, it's a racket)

Anyway, this is all supposed to be about me, not about being educational... so.... with my totally made-up diagnosis in hand.. let me explain what I've been going through, and then you can exercise your pop psychology and social judgment against me. (Don't worry, I've already judged myself so your positive or negative reinforcement will have very little impact unless it serves my internal narrative.)

Two years ago I decided to strike out on my own and start a company with a friend. We bootstrapped a niche consulting firm where we could both ply our knowledge of Information Security to help clients understand the often complex world of regulations, dark webs, cyber-technology, policy and people. That company grew from a conversation had after my partner discovered he was being ousted from his current company by his business partners in a hostile buy out sort of situation. I was working as a traveling salesman selling hopes and dreams of a world where pirates and doppelgangers could be defeated through the judicious application of magic missile spells. (Translated: I was a "Security Solution Architect" covering 1/4 of the US for a major value added re-seller.)

The two of us lamented our "making other people rich" sob story and decided hell, why can't we make us rich too? (Because starting a company always makes you rich right?)

Thus we became business partners. The End.... er. No, the beginning.

The good news - we had a pretty good first year professionally. Made money, hired some good people and actually managed to solve a few problems for our clients. Running a new company is a stressful exercise, and it is an enormously time-consuming endeavor. If you prefer a 9-5 life (not that many people in my line of work get that even in corporate jobs) then starting your own company is not the best way to continue that lifestyle.

Add to this the fact I was working a contract role 40 hours a week outside of running the company, managing the consulting staff and delivering my own consulting work for my clients. (Why am I discussing all this? Well stay with me, there's a twist coming.. just watch. Remember that functioning thing I started with.. hint it's in the house!!!)

The early part of the first year was tough but I'm a Marine, I bitch and complain about my life as a way of venting as I continue moving forward. Working 80-136 hour weeks.. (Check my math - 24 hours, 7 days, 168 hours in a week, average 4 hours a night sleeping for seven days - 136 hours!! Damn I'm good!) was long but I was managing.. oh did I mention I volunteer at multiple professional organizations and a charity bike ride? My dance card got pretty full and while I can't claim all my time was spent in the best way I could with the results I could deliver if well-rested and under lower stress, I am told I faked things pretty well.


This alone was probably manageable for a long time for someone with my inability to recognize my physical and mental limits.. and then something worse happened.

My wife and I both lost our Dads in a two day stretch. Neither passing was unexpected, but the timing was complete and utterly not okay.

Because both our fathers were.. interesting people.. neither family had what I'd call a traditional mourning process. My wife's family vacillated between "Thank god the bastard is gone!" and "It's too bad we didn't get to fully reconcile." My siblings and mother proved that all the times we were told in crisis we'd always be there for each other only meant "crisis" defined in some other sort of way I guess I never really learned or that maybe "a death in the family" doesn't really equate to a crisis... I'm still not sure.

Regardless, my younger brother bore the majority of the weight of managing Dad's situation and to this day is handling our Mother's declining state without much of the "family unity" I always assumed we'd have.

We buried both men months apart. I don't think I felt much of the impact of any of this at the time. I still don't think I've felt the impact the way I was always told people should with the passing of a parent. It just kinda happened, we got together for a day or two and moved on.

It was very sad.

Not because my Dad was gone, but because there was very little fanfare, or a celebration of his life or even impact from his passing. In many ways to his friends and family, he had become a non-issue in his later years because of his lack of socialization and his frustration with the state of my mother's relationships. He'd left the world with a legacy as a news photographer and a father, but in those months after he passed we really didn't do much to recognize any of that. It was on to the next issue, life goes on - which my education from TV and Nicholas Sparks movies never prepared me for fully (I hate Nicholas Sparks.. the fucking Notebook.. whatever).

I don't think I realized it at the time, but this is when everything started to change for me.

Things take another turn in Part 2