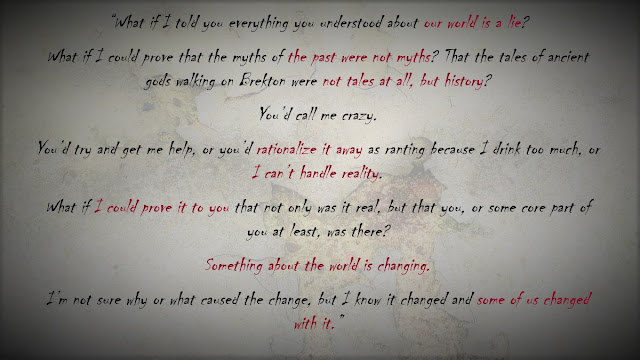 Brekton: Godfall Ascension is a modern fantasy setting where the player characters take on the role of a long-forgotten god of the world. These gods, or “Incarnates” as they will become known, are the representations of the world’s ancient polytheistic belief systems who are reemerging in the modern world.
In the past of Brekton, many magical creatures roamed its surface, skies and seas. Today, mankind has eclipsed these beings as the master of the world. Few in the modern age of technology, instant communication, Internet knowledge, and global travel believe any of these creatures truly existed. Even those who study the planet’s history and ancient cultures find little evidence that this fantastic place was real.
The people of Brekton, the humans, had an enormous impact on its evolution. Once, humanity was one of numerous races. They existed alongside the elves, dragons, dwarves and every fantastic being you’ve read of in fairy tales and mythology. Humanity as a culture was long oppressed by the longer-lived peoples but something changed as they began to rise in power. Humans brought a unique power into the world of Brekton that no other race truly understood. That power – industrialization.
While talent with rudimentary technology was common and even strong in the fantasy races like dwarves and goblins, only humanity could command its true power. What started with simple invention and enhancement of what we would consider medieval technology – the Wheel, the mill, the ship – evolved in human hands into printing presses, cotton gins, motor vehicles, AC and DC power and information systems.

This change to the world brought with it the death of magic, the elimination of mythical creatures. Mankind changed Brekton and magic died. No one living in the modern world knows why, but along with the death of fantasy came the growth of human faith and belief. This belief supplanted the religions of the Gods of Brekton and replaced them with a monotheistic belief system. The Cult of the One grew until it was just the worship of The One. The sole faith in the sole deity.
The One god.
The old world, the fantastic world of Brekton, died and mankind forgot it ever was.
The power of mankind was so strong that its forgetting of the old world forced its fabric to change. Evidence of Brekton’s magical past was itself changed to fit humanity’s new perspective. No one found evidence of elves or dragons because after the shift, the evidence didn’t fit the human paradigm.
Dragons were not Dinosaurs, Orcs were not Neanderthals, but mankind couldn’t see the difference and The One God’s faith overwrote what was once fact with myth and legends. The long magical history was relegated to mostly forgotten fantasy.
Like that shift so long ago, the time in which you and your players find themselves is another turning point. Something has again made a change to the world of Brekton. Something has revived its true history and the once godly powers are returning. Humanity is largely unaware of this shift. It has been subtle and its effects gradual. Secretive elements of the faith of The One God knows the change has occurred, but the leaders of the religion, like the general humans of Brekton are unaware.
You and your friends represent the change. The transition from modernity to myth happens to each of you in a unique way as you discover you are an aspect of divinity incarnated in human form. This incarnation has changed you and those like you, but it has also been a sign of other changes in the world that may or may not be related to the end of the world itself.
Brekton Godfall fiction gaming storytelling writing