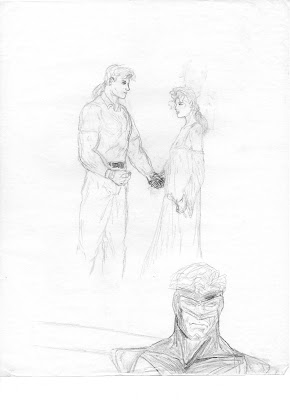 He could feel the waves of exertion wafting away as the energy leeched from his muscles and swirled about him. The impact hadn't hurt him, his physiology had seen to that, but even the act of absorbing kinetic energy took its toll.

Slowly, he pushed himself to stand. His muscles tightened, the fat burned away and he felt the raw surge of power rush through him as his cells consumed what they craved. He wanted to jump and to fly again. To run against the pull of gravity, to slip it's grasp as he'd done in his youth. The urge overwhelmed him for a moment before it subsided, leaving only the aches of age and atrophy behind.

Years ago he'd been a tights wearing superhero. He was  no longer that person, he was beyond heroism. Now he was a simple artist living in a modest home in a normal world that had never known super powers or alien invasion. A world he'd inhabited for decades an discovered while running from his former life and losses.

It had all come back tonight. This chilly October night was the anniversary of his loss and of his surrender. Twice the damned day had caught him. He'd run. Crossed time and space. Become another version of himself and met another version of her. That had worked, they were happy.

In his world he'd lost her in a dramatic event. She'd sacrificed herself to save him and he'd been lost just the same. Her other self and the world he now lived in didn't run by the same rules. It was a real world, or that's what people here considered it. He'd been a four colored hero once. Now, he was  a sad aging and pale man, twice a widower.

This world played by far crueler rules. You didn't fear nannite mind control bugs or magical curses cast by sultry demonic priestesses. Here you had to cope with incurable diseases and treatments that left you far more devastated after their course of application.

He'd lost her to illness. He watched as she grew tired, frail and weak before his eyes. Her pain had been great, but she had never surrendered to it. When the end came and the last moments of her life ticked by, she smiled, raised her hand to his face and cried.

"I'm sorry I'm abandoning you just like she did." She said weakly. "I'm sorry we weren't together forever as we'd planned."

He couldn't handle the skeletal touch and drawn flesh. Her fingers, once soft and supple, were ravaged by illness, mottled and cracked.

He'd fought for her. He'd saved her and yet she'd died again. Again he'd been powerless to stop it. Powerless was a feeling with which he'd never learned to cope.

Despite the struggle. Despite the sacrifice. He'd lost her again and the rage returned and overcame him. Rage had driven him from his original home. Rage had darkened his soul to blackest obsidian and drove him to feats of madness. Rage drove him again. Now he ran again unsure of his direction.

This real world had touched him, but he was still from the four colored universe. He yearned for a scarred scientist in weaponized armor to appear, laughing and taunting him. He pled for a foe proclaiming their ploy and unveiling a plot to defeat him. This wasn't that world though. Here family and friends gathered, said their last goodbyes and moved on. Here, power like his was impotent and useless against true evil. There was no resurrection, no secret clones or hidden rebirth. Here dead was dead and the foe was unbeatable.
Heroes storytelling writing