The Analog Gamer - Tales of the Stargate Season 1.0 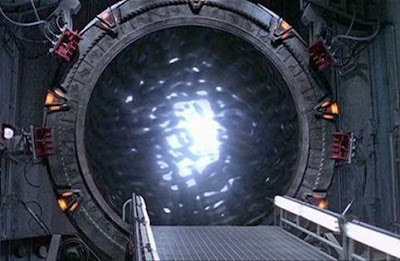 Tales of the Stargate: Season 1

Introduction: Learning a new game system can be a daunting task and transforming a love of a book, movie or television show into an interactive form like role-playing games is no small feat. Luckily Alderac Entertainment has done the hard work for you – they’ve written the extensive rulebook (that is now out of print but still accessible) and provided you with the tools necessary to create your own cooperatively developed stories in the Stargate SG-1 universe.

You have the tools – now what? – Well that answer can be as simple as taking one of the many plot hooks from the excellently written SG-1 supplements and developing your own campaign. Experienced Game masters will have little problem doing this but what if you don’t have the time? What if you don’t want to do the legwork of starting an SG-1 campaign? That’s where Tales of the Stargate comes in.

Tales of the Stargate is meant to serve as a series of adventures useful in introducing new players and Game masters to the SG-1 universe. These modules serve as an “adventure path”, meant to demonstrate how you construct an SG-1 campaign. Experienced Gms should feel free to take anything from these adventures they want, and by no means is this series of adventures a cannon story.

Tales of the Stargate tells the story of SG-17, a newly reformed team assigned to the task of Exploration. In the scope of the SG-1 timeline the opening events of Tales of the Stargate: Season 1 takes place shortly after the SG-1 season 2 episode The Fifth Race (2-16). The players assume the role of the team members and should all be new recruits into the Stargate program fresh out of indoctrination and training.

Plot summary: The newly reformed Exploration team SG-17 is gathered and directed to a briefing with General Hammond at the SGC. Their first mission is simple – accompany a Tok’Ra operative named Mallus who has information on Major Laurel Thomas and her diplomatic liaison team. Mallus will transport the team in his teltak scout runner to Major Thomas, the former leader of SG-17 tasked with establishing an intelligence network that could be used by off world SG teams when assisting deep cover Tok’Ra agents without endangering either party. The Tok’Ra reported Major Thomas and her team missing two weeks into the six-week mission to P5J-432 a Tok’Ra base in the domain of the Goa’uld System Lord Heru-Ur.

SG-17 along with Mallus arrives to find that P5J-432 is not the same world it once was. Expecting to find a barren, lifeless world barely capable of supporting life they instead discover a world rife with an advanced civilization that claim to be Ancients, the creators of the Stargate system and ancestors of humanity. The seeming return of the Ancients and the disappearance of the Intelligence team led by Major Thomas causes repercussions back at SGC.

A previously unknown gate is discovered on P5J-432 (Alvaron) and SG-17 is directed to continue the search for the missing people while searching for clues to confirm the claim of the inhabitants of the planet. SG-17 discovers that the Ancients are in fact a group of interstellar traveling con men who set up illusory cities to lure potential slaves into a false security before they sell them to Goa’uld System lords as labor. SG-17 must avoid this fate while disrupting the False Ancient’s plans.

Plot summary: The team must journey to P3X-471 on an exploration mission. When they arrive they find a cold world about to enter into a harsh winter. The Stargate itself is positioned in the middle of a large village and people of possibly Norwegian descent stir when the “circle of stone” comes to life. They must successfully establish a relationship with the villagers on the planet. Upon conclusion of the negotiations SG-17 returns to the SGC. Immediately after closing the gate and disembarking for debriefing the Gate activates and a signal comes through on the emergency communicator the team left with the people requesting Earth’s help defending from an invasion.

Stargate Universe concepts introduced for new players: Exploring worlds through the gate. Establishing diplomatic relationships with the scattered humans in the galaxy.

Long-term plot: Actual introduction of Heru-Ur and his forces. Begin the teams association with Norse people as a lead in to the seasons focus on the Asgard / Jotun storyline.

Plot Summary: SG-17 returns home from their actual Alpha site rotation to six weeks of stand down base duty. Removed from the active roster they are asked to help other teams with research and training projects. One of the projects assigned to the team is to assist a rebel Jaffa named Kortak who is awaiting relocation after killing his Goa’uld master and defecting to Earth. Kortak quickly grows tired of the supervision and disappears into the base. SG-17 is tasked with finding the alien before he escapes the mountain or makes it up to NORAD and potentially calls attention to the Stargate program.

Stargate Universe concepts introduced for new players: The Jaffa. Cheyenne Mountain and the SGC base layout.

Plot Summary: In the aftermath of Sokar’s assault on the SGC in pursuit of SG-1’s nemesis Apophis (Stargate SG-1 Episode 2-17: Serpent's Song) SG-17 is sent to meet with SG-7 led by Major Long on P6C-894. Long and his team have discovered a material they believe will help to protect Earth from a similar attack by Sokar. The material resembles liquid glass and is discovered in the ruins of an unknown civilization. While SG-7 completes the initial analysis and begins to package the substance for transport back to the SGC labs Dr Karl Kreeder the team’s Theoretical Physicist disappears in the woods near the ruins. SG-17 must find the errant doctor and discover why he has gone missing.

Plot Summary: SG-17 is sent on another gate exploration mission, this time to a planet not on the cartouche or in the Abydosian records. The SGC dialing computer’s random dialing protocol has located a previously unknown address and after initial MALP investigation the world appears to be inhabited by small quadrupedal creatures that vaguely resemble earth Sloth. SG-17 is sent through to establish a beachhead and make first contact with the creatures.

Plot summary: SG-17 has been on PX8-924 for three days and has discovered a settlement of humans who are being forced to mine Naquida for Heru-Ur’s fleet. The System Lord has left an underling in charge but is preparing his fleet to conquer more of Apothis’s sundered worlds. The villagers quickly recognize SG-17 as a way to free them from the oppression of the Goa’uld and begin to systematically sabotage the mining operations. The goa’uld underling and his contingent of Jaffa quickly try and put the insurrection down but fail to stop the slaves before they ignite a cascade reaction in the naquida mines. SG-17 must deal with this building catastrophe and if possible secure the resources for Earth while removing Heru-Ur’s forces and liberating the slaves.

Long term plot: Build up SG-17 as a thorn in Heru-Ur’s side.

Plot Summary: SG-17 arrives on a temperate planet coded as P4M-154 to a familiar sight. The False Ancients have set up their traveling home here and are exploiting the native population for an unknown reason. SG-17 must infiltrate the city and using find out what the purpose of these cosmic con men truly is.

Plot summary: SG-17 returns to P5J-432 to meet with Mallus and the Tok’Ra there. Mallus delivers a number of personal items belonging to Kitri Samira, the former Tok’Ra member of SG-17 recently discovered by the Tok’Ra on an unrevealed planet. In the belongings is an odd sphere of blue-green glass that shines with an odd inner light.

The team is escorted into a secure area of the Tok’Ra base tunnels and asked to examine the effects. The Tok’Ra then leave the room claiming it is to allow SG-17 peace and time to study the objects. Once a member of the team touches the sphere a glowing light envelopes them and they come to in the SGC. Immediately the team notices that they are no treated like themselves, instead they appear inhabit the bodies of the original SG-17 three months before their disappearance. At the same time they discover that the members of SG-17 currently inhabit their contemporary selves.

Long-term plot: Introduces the players to the original SG-17 team personally, building their need to find their predecessors.


Season 1- Episode 10: Something Old.. Something New

(Part one of a two Part Episode)

Plot summary: The team is sent to relieve the active watch team at the Alpha site (P3X-984). SG-17 arrives to find that the base is abandoned and looks as if it has been for a very long time, despite a conversation that takes place immediately before the team debarked from the SGC moments earlier. SG-17 begins to look around and discovers that somehow they have arrived at the Alpha site quite some time in the future. Journeying outside the gate complex they discover a sprawling humanoid civilization with advanced technology living happily on the planet. Through the course of their investigations they befriend a young couple and discover that while the future holds great things for humanity the past – their present – is in great danger from an unexpected enemy.

Stargate Universe Concepts introduced for new players: The Alpha Site. Time Travel in the Stargate Universe.
Long term plot: The team begins to discover the threat of the Jotun. Minor clues as to the location of Major Thomas and the former SG-17 team are revealed.

Season 1 – Episode 11: Something Borrowed.. Something Blue (Part two of a two-part episode)

Plot summary: With the help of their new allies in the future, SG-17 must return to the long forgotten Alpha complex and rewire their portable DHD to allow the gate to transport them back to the SGC at the proper time. An future humans and their replicator allies believe activating the gate will clue the Jotun Empire to the location of the refugee humans on the Alpha site and attempt to prevent SG-17’s plot from succeeding. Ties in to Stargate SG-1 episode (2-21) 1969.