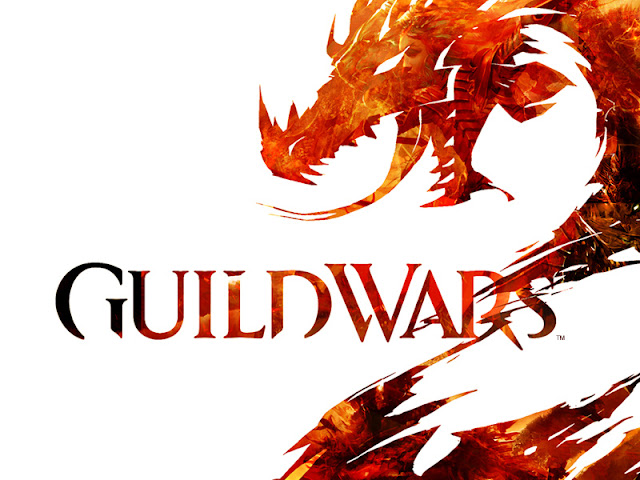 Lately I've had such a busy time that I've been unable to commit to regular video game oriented work. I don't feel like with my current job I can be the "johnny-on-the-spot" I once was with regards to gaming.

However, for those who read the Day 17: Thoughtsies! post, you know I still have an interest in writing some critical pieces along with the personal info and fiction.

So here is a quick series of thoughts on the first public/pre-order weekend and my experiences playing Guild Wars 2.

The original Guild Wars game published by NCSoft was one of the first massively multi-player role playing games (MMORPG) I actually could understand playing. It used a Purchase once, play a lot business model. Players bought the game just like you would buy any game at the time - Guild Wars was no different than say Call of Duty 2 in that you got the entire game and all its features for one retail price. 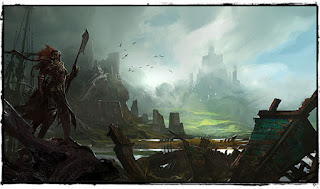 This was an odd business model for an online game. The competitors at the time mostly held to the Buy the core game and pay us ransom to continue playing business model that World of Warcraft and Star Wars: The Old Republic continue to this day. Guild Wars however didn't hold to that. You didn't buy it and find hidden costs like micro-transactions to buy more classes or in-game currency that bought you better weapons or armor (at least not at first.. that changed a bit with later expansions).

Instead you got it all and all ArenaNet and NCSoft asked is that if you wanted the later content.. well you pay the retail price to effectively buy new connected games set in very different parts of the online game world. Each expansion added new classes or features to the original but you never HAD to buy them to enjoy Guild Wars.

The reasons that were given for how the publisher and developer could deliver this experience using this business model was simple, but technical if you're not up on your gaming lingo. Effectively, Guild Wars runs off a bunch of servers called shards that are only really massively multiplayer if you are in certain parts of the game called hub towns. Every other part of the game, the quests, exploration and story oriented parts existed only for you and your teammates - in something called an instance.

Instances are common in online games, effectively isolating a finite number of players into a small scenario. This implementation also meant that the game servers could initiate these story areas for gamer groups without having to track state constantly against everyone else logged into the same server at that time. 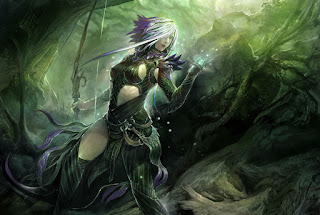 Players also benefit in some ways because often in that era of on-line games the design called for rare monsters, who often allowed players to complete the pinnacle quest in a storyline, to only appear in the game world in a certain interval. All the players who need to kill that bad guy have to wait around for him to show up. This design limitation was common then, but it's been downplayed in most online games since.

The instance system effectively gave teams of players their own sandbox and only their friends within their party were invited to kick down the sandcastles. While it fixed the resource competition problem, it often meant solo or small group players struggled to see the most dynamic and impressive fights due to a lack of spontaneous helpers.

Guild Wars 2 is following the same purchase model, but it is changing up the instance approach. Instead of tons of personal, isolated parties fighting evil, it offers players an open world populated with story-focused instances. This design more closely fits the traditional MMORPG model where you can end up meeting anyone at anytime to team up spontaneously and achieve a task. Ad-hoc teams are easier to form and split just as spontaneously as they form.

This change is apparent to the long-time Guild Wars fan immediately upon logging into the sequel. During this weekend's Beta event the game servers were populated by various and sundry players. Over the course of the gameplay experience I found myself aiding many strangers to defeat hordes of onrushing centaur foes. I also revived a few folks who would otherwise have been forced to take the death penalty and resurrect their avatars back in camp, their missions unfulfilled and their resources drained for the effort. 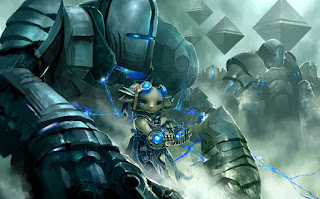 Guild Wars 2 is a modern game. It features gorgeous graphics and the gameplay interface that has become more or less standard in the AAA online titles. Along with a move to shared worlds the game also introduces some new options for players like the ability to play as something other than a European Human, Oriental Human or African Human analog.

New races include the bestial Charr, who were the great enemies of mankind in the first game, the nature attuned Sylvari (plant-like elves or is that really elf-like plants?), the gnome-like techno wizard Ashura (The game's diminutive genius race) and the giant-kin Nords (who appeared as allies in Guild Wars later expansions.) Frankly during this limited play time I chose to play what I understood.. the noble Human, the now-fading race of mankind has ascended to mastery of the world and is in decline as these new races rise up.

Playing a human may seem the cop out, but for me, as a veteran of all the previous games, I had an interest in seeing the changes wrought by the decline of humanity. This proved to be a safe choice though and the game began with a fairly expected opening. I was a human noble (another character creation option) who rose to prominence and notice during a battle defending the last human stronghold from an attack by barbarous centaurs.

Classes in these games often define who your character becomes. The original Guild Wars offered a few standard choices alongside some you would not see in your average World of Warcraft clone. These core classes mostly continue - the illusionist Mesmer returns alongside the Necromancer and Elementalist. Martial classes like the Warrior, Ranger and Thief also appear. The new classes include the Guardian (a paladin analog) and the Engineer (think guns, bombs and turrets). 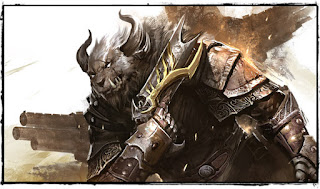 I noticed some gaps made by the absence of some of the setting-specific classes like the Ritualist (a spirit commanding mystic), the shadowy Assassin (Guild Wars' Ninja) and the Paragon (another Paladin-alike). I also think however that these gaps will not be long if Guild Wars 2 turns into a successful game.

Over the last few years the massively multiplayer online game evolved away from some of the things Guild Wars initially offered. Games like Lord of the Rings Online proved that strong story-based tales had legs. Star Wars The Old Republic brought player choices into dynamic story and Trion World's Rift refined the public event from the protean stage it first appeared in thanks to Warhammer Online.

The world of Guild Wars 2 is meant to be alive and changing based upon the actions of the real players within it. I encountered a number of events in the starting zones of the game but at this point, since I returned and participated again in the same events helping others later I'm not sure that promise of dynamic player impact has quite arrived. I should not be offered the chance to defend the garrison soldier making a daring dash for supplies again once I've participated in setting that world variable.. it just seems like the same old random fights with no real impact that has plagued games since Sony's Planetside. 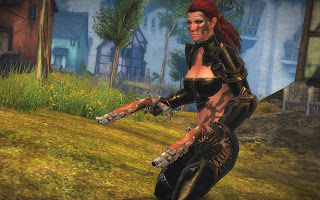 I only logged about five hours of game time this weekend and spent it playing a single Human Noble Engineer character. My hero continues her questing and I finally reached the first quest where I had a branching choice of how to proceed at level 8. While investigating treachery within the human city linked to kidnapping and bandits, the head of the city guard offered me the option of attending a party to ferret out information or searching the suspects home while said party occurs.

I ended my weekend experience just shy of the level needed to perform that story instance alone, so I will beg off on commenting about the actual impact the branching offers players in telling their own tale. Guild Wars 2 is a good on-line game at this point that could actually advance the game genre provided it manages to deliver on the long promised player impact. I'll be playing it when it launches in a few months and may take some time away from my current recurring game Lord of the Rings Online if the game offers a story anywhere near as interesting as Middle-Earth.