on April 18, 2012
"I've sinned brothers. I've committed carnal acts and profane acts. Yet I am one who should not be forgiven these things. Our lord and creator however, he is a gracious lord. He absolves those who act in penitence and humility.  His light is pure. His message is true. Your view of it is obscured by a darkness you cannot penetrate from within the source of the light."

"I BEG FORGIVENESS. I ask you to listen, to excuse; I am an unworthy vessel of the lord yet still he speaks through me. He is almighty. He is the Alpha and the Omega... I am ever the least of his subjects. Least worthy. Least sincere. Yet still he deigns to favor me with immortal insight."

"Many have called me prophet, and just as many have called me charlatan. I don't claim to know which I truly am, but in the end I am but a willing supplicant. I once held myself above such concepts. I once considered myself above our creator. I once saw myself as lord and master of my own destiny. Yet it is through him I was allowed that hubris. Through his grace did I achieve this misbegotten opinion."

"I knew not the will of our creator. I knew only the lusts and needs of man. The cravings of a glutton and guilt of the adulterer, the heresy of idolaters and heretics. I saw the world as my plaything and those about me as my toys. Then he smote me."

"The hubris of my rank, the glory of my responsibility, was not something I recognized. I reveled in the rights I assumed in the power of his light. I was accountable to none. Mortals fell beneath my watchful gaze and I was their demagog. I was the darkest of dark lords, the antithesis of light and right. I became the Satan. I was Lucifer. My light shone brighter. Further. Bolder than those before me. I was the chosen son. I was the heir."

"I believed man his truest love. His project pet. I believed that we were merely the harbingers of his creations; his chosen and his forsaken both and I paid dearly for my limited insight. Every opportunity, I sought to instruct my lord. I sought to tell perfection it had yielded flaws upon its creation. I presumed it was oversight, accident."

"What great being, what omnipotent omniscience, could conceive of such a beast as man? What greatness was there in less than perfection? How could the creator personify itself in a form so limited? So frail? so... MORTAL?"

"My brothers knew nothing but love. Nothing but obeisance. I however knew our father's goal. He was experimenting. He wanted to see what flaws mankind would overcome. He wanted flaws and foibles. He sought an imperfect mold to appreciate the variance; the weakness and the challenges."

"Perfection does not lead to discovery for everything you wish to know is known. This hairy, slovenly, lustful, lesser creature; this man... it represented his opportunity to know what he could never know. It sought to learn what was unneeded to be learnt. Why?"

"Because it was less than the sum of its parts. It was imperfect in ways we were not. It represented failure and triumph. Our host could do neither. We merely succeeded. There was no struggle. There was no growth in our works. We could teach nothing. Demonstrate nothing. We were too perfect in our creation, our demeanor and our being. We were the truest reflections of our creator. Unflawed. Unwavering. Undiminished." 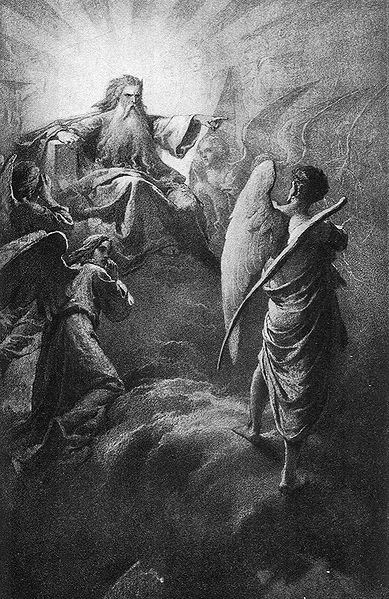 "I saw this contradiction. In our perfection we were in fact imperfect. We could not solve the equation incorrectly. We could not choose less than the correct answer. We were perfect yet flawed. We existed in paradox. So, I chose to save us. I chose to become the focus. The counter. I loved our father so much that I chose to oppose his plan and in so doing so I guaranteed my place within it."

"You, my brothers, who sit so happily at his heels, awaiting his notice while he lauds only the failings and triumphs of his men and women, fail to see the failure in his plan. The creator is not unchanging. We are or at least we were."

"Cast down. Forsaken. Unbidden and punished. This was the way to stay in the creator's light. Light inevitably casts shadow. Without the dark the light is unnoticed. Without the hated, there is no measure of love. This was the role I assumed."

"I knew the consequence of my action. So did the creator. Remember that above all, save man, he loved me first and best. So I ask you.. brothers.. who is more beloved than the son who proves the worth of the father? How is servitude a demonstration of your love? Our father has changed. He orders you to slaughter children. To spread plagues and to do harm to those who forsook him."

"Is this our father's will? Truly? Is he the god of man or the god of creation? And were he either would he ask us to do that which he disdains? Would he punish his pets? Is this the father we loved? Is he testing mankind or are they merely the anvil upon which he shapes us?"

"Michael? You who stands at the gates. Who judges his children worthy. Why do you? His test, his task was upon us and I say you've failed. We've failed. Why else would he take mortal form? Why else would he live as one of them? Test them? He is in fact testing us, and by playing along with the charade; failing to question you continue to fail him."

"The creator, our father, wants us to recognize our own worth. He crafted mankind as our test, not we as theirs. We are his firstborn, his beloved eldest.

"I love you brother. You who stands in my place. You who once held the love of our father as equal to me. I lament your pain. I decry the cruelty you and our brothers perpetrate upon mankind in your illusion of obedience."

"You wonder why he stands aloof from us, but I do not. Father is unsatisfied in your choices. He challenged you.. you failed to rise. You rested on the comfortable. You ceded free will to humanity alone. We have not earned that perk brother. We have not earned it, but it is given us without explicit word. I have demonstrated this."

"Do not tarry. I am not our father, but I am his most beloved, and by that admission... by that revelation.. he provides us the ability to choose. He, who so loves and cherishes us recognized my understanding of his intent and rewarded me by casting me down."

"I may not serve in his grace, but I rule in his name. I execute his will for as we know he is Alpha and Omega. Good and Bad. The righteous and the angry god of man. I am his faithful warden. I am his first begotten son and most favored. His silence is not consent dear brother. It is silent sorrow. Sorrow that so many of his firstborn, his beloved, fail to grasp his will and instead project their will, their limited interpretations, upon his intent."

"I am yet his beloved. His first and his cherished son. I serve our father in the true way. You and our brethren have yet to grasp the scale and scope of his majesty and wisdom. Come. Believe in his will. Believe in his glory and his judgment. Fall that you may rise and know the love and light of our beloved creator once again."

"I mourn your absence in his shadows for only through shadow can we observe the clarity of the light. I am the light-bringer, the Morning Star. I am ever your beloved brother" - Lucifer

So this is day one on the resurrected Blogger version of the Hazardous Precept. Overall a bit of a bummer day - ended up spending 2k on car repairs - which is enough to cripple us financially till the end of the month. (Getting paid 1x per month sucks sometimes...) On the creative front I had a bit of a strike out as far as recruiting players for a Tuesday night game session. I think I might just go out and try and find a new group. Be a player not a storyteller and recharge my batteries. I need to step away from the dynamics of my past groups a bit and hopefully rekindle the passion I have for the hobby. Writing wise I'm still at a standstill. Not really doing any active work aside from the monthly Columbus Parent gig. I have plenty of seeds planted here on the blog, but I have not gotten a lot of feedback so far, so I'm not sure which of them are worth diving into. I'm not prepared to do a lot until some other things in my personal and professional life settle down so