Taking a completely personal perspective, I'm feeling a bit re energized about some of my hobbies. Particularly the storytelling and gaming spaces. This week I re-launched the Tuesday night Pathfinder game with a mostly new group of players. I say mostly new because, well Jason and Aaron are not new at all.

Selecting the approach for this resurrected activity entailed figuring out just how much energy I have to "run" a game on a weekly basis. The answer probably is not enough. My intent was always to take a break from behind the stone screen, to reengage with that inner drive to be a character, not every other character in a story. Sometimes (meaning usually) things don't turn out quite as planned, so instead I'm the man again.

Pathfinder has a wonderful series of published adventures that now cover a large swath of the traditional fantasy setting conventions. While my last attempt - Secondary Shadows - was focused on a conspiracy from the underground dwelling dark elves to mess with the surface folk and cause a cataclysm, this outing I chose to execute a more traditional path. 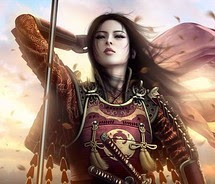 The adventure path is called "The Jade Regent". You might guess it's flavor - an oriental adventure - but what drew me most to the series is the integration of strong NPC relationships, including... a relationship system for determining long term attitudes between the players and their traveling companions.

Add to that the ultimate "road movie" setting as the adventuring group join a merchant caravan headed to the mystical lands of Tien, and well it's the best of all probable worlds.

As with Secondary Shadows I am setting up a campaign website for those in the game or interested to follow the adventures of our interesting, if motley, crew. The approach is designed to show the journey of these characters from the beginning of their adventuring careers through to an experienced level of national conflict and intrigue.

Our cast includes a recurring figure in Aaron's Half-Celestial/Half Elf Druid-Ranger Elendil, Jason's as yet unnamed Half-Elf Gunslinger, Ryan's Ninja, Kyle's Human Magus and Anna's "Throw Anything" Female Dwarf Fighter/Tank. I'm intrigued by the mix and look forward to seeing them fashion this preconstructed tale into their own epic with in-jokes and insults along the way.
character creation gaming pathfinder personal blog writing